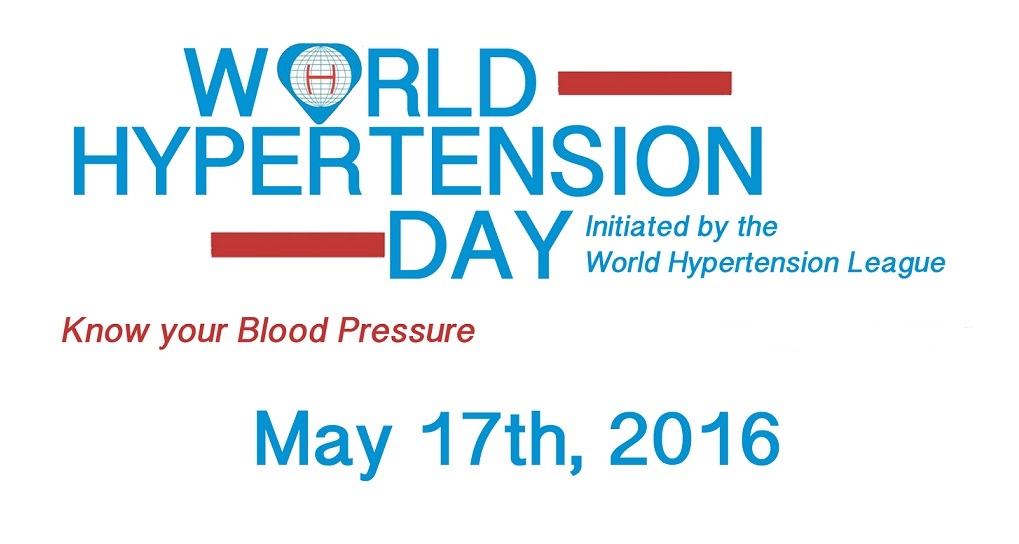 World Hypertension Day is celebrated every year on 17th of May to raise the common public awareness about the hypertension, its preventive measures and complications, through the variety of activities and events.

World Hypertension Day is celebrated every year using a particular theme of the year selected by the World Hypertension League to make the campaign more effective on international level. It has been recommended by the WHL that BP should be less than 140/90 mmHg for general population and hypertensive population without complications whereas for people with diabetes mellitus or chronic kidney disease, it should be less than 130/80 mmHg.

Hypertension is a condition called high blood pressure during which the arterial blood pressure raises to high level from the normal level (120/80 mmHg). It is medical condition called as silent killer as it does not show any clear symptoms however severe hypertension show some symptoms of headaches, sleepiness, palpitation, blurred vision, fatigue, dizziness, confusion, ringing sensation in the ears, breathing difficulty, irregular heartbeat.

It is divided in two types (primary or essential hypertension and secondary hypertension) on the basis of its causing factors. The primary hypertension is more common type however its causes are unknown. Whereas, causes of secondary hypertension are kidney damage, adrenal gland over-activity, sleep apnea syndrome, tumors, recreational drugs, thyroid gland dysfunctioning, aortic coarctation, pregnancy-related conditions, over or wrong medications, alcoholic drinks, bad food and etc. 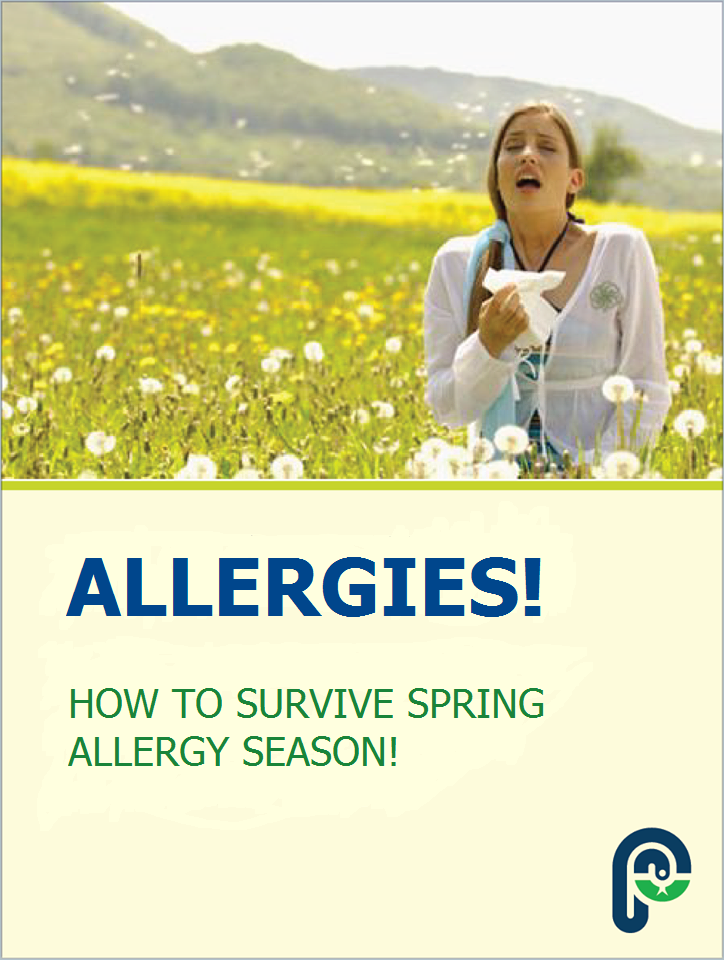 Spring came, but not for everyone this season is welcome. The flowering trees warns recurrence of allergies caused by pollen, which are in the air ready for an allergic attack.

Allergy is a very common condition that affects at least 2 to 10 people.

What happens during an allergic reaction?

After the person is exposed to an allergen by inhalation, ingestion or skin, a series of physiological events occur in the body as a result of immune response associated with production of specific antibodies called IgE. These antibodies are linked with allergen causing a chain of chemical reactions that release histamine, responsible for the appearance of allergy symptoms such as:

Nowadays there are different treatment of allergies

In the cases of allergies more severe, which cause systemic effects in addition to local symptoms such as: difficulty in breathing, decreased blood pressure or anaphylactic reactions, are very necessary medical examinations and immediate treatment with cortisone (Prednisone, Prodexa). 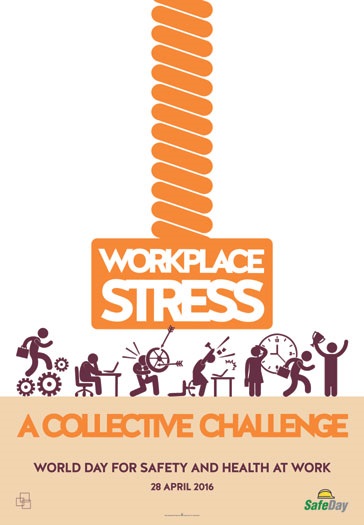 World Day for Safety and Health at Work 2016

The theme for the 2016 World Day for Safety and Health at Work is “Workplace Stress: A collective challenge”

The annual World Day for Safety and Health at Work on 28 April promotes the prevention of occupational accidents and diseases globally. It is an awareness-raising campaign intended to focus international attention on the magnitude of the problem and on how promoting and creating a safety and health culture can help reduce the number of work-related deaths and injuries.

Today, many workers are facing greater pressure to meet the demands of modern working life. Psychosocial risks such as increased competition, higher expectations on performance and longer working hours are contributing to the workplace becoming an ever more stressful environment. With the pace of work dictated by instant communications and high levels of global competition, the lines separating work from life are becoming more and more difficult to identify. In addition, due to the significant changes labour relations and the current economic recession, workers are experiencing organizational changes and restructuring, reduced work opportunities, increasing precarious work , the fear of losing their jobs, massive layoffs and unemployment and decreased financial stability, with serious consequences to their mental health and well-being. 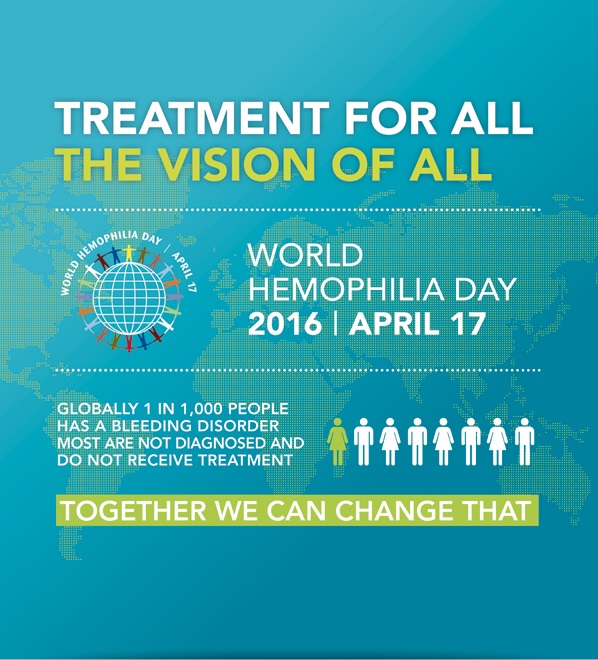 World Hemophilia Day is an international observance held on April 17, 2016 by the World Federation of Hemophilia (WFH). It is an awareness day for hemophilia and other bleeding disorders, which also serves to raise funds and attract volunteers for the WFH. It was started in 1989 and is held annually; April 17 was chosen in honor of Frank Schnabel's birthday. Frank Schnabel established the WFH in 1963.

Haemophilia is a group of hereditary genetic disorders that impair the body's ability to control blood clotting or coagulation, which is used to stop bleeding when a blood vessel is broken. Hemophiliacs (people with hemophilia) have lower levels of clotting factor in the the blood and bleeding continues for much longer periods.

Each type of hemophilia causes prolonged bleeding which is the main symptom of hemophilia. Bleeding can range from mild to severe. Bleeding is often internal, although people can bleed outside the body too.

Left untreated, severe cases of hemophilia can lead to an early death. However, there are successful treatment options available, and if managed, people with hemophilia are largely unaffected by this condition living full and healthy lives. Treatments for hemophilia involve injecting the missing clotting factor into the bloodstream.

Unfortunately, there are many people in the world, who receive poor treatment or no treatment at all, for hemophilia and related bleeding disorders. According to the World Federation of Hemophilia, about 1 in every 1000 person has a bleeding disorder; many are left untreated. The aim of World Hemophilia Day is to raise awareness about hemophilia and increase the availability of treatments for this condition around the world.

The slogan for World Hemophilia Day 2016 is 'Close The Gap'. 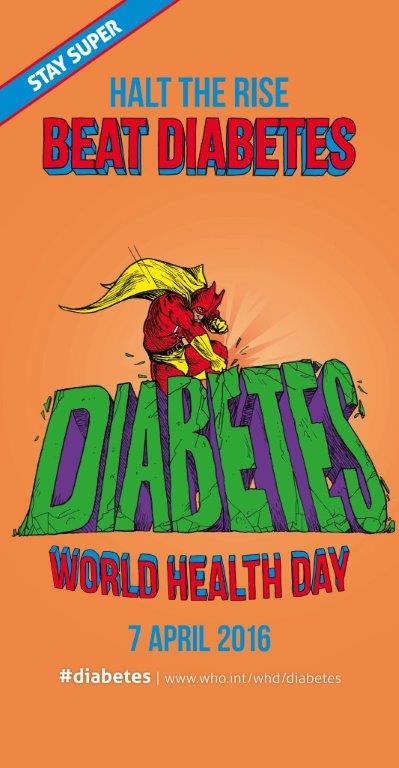 World Health Day is celebrated on 7 April every year to mark the anniversary of the founding of WHO in 1948. Each year a theme is selected that highlights a priority area of public health. The theme for World Health Day 2016 will be diabetes, a noncommunicable disease (NCD) directly impacting millions of people of globally, mostly in low- and middle-income countries.

Diabetes is a serious, chronic disease that occurs either when the pancreas does not produce enough insulin or when the body cannot effectively use the insulin it produces. The hormone insulin regulates blood sugar, or glucose. There are three major types of diabetes:

Raised blood sugar, a common effect of uncontrolled diabetes, may over time lead to serious damage to the heart, blood vessels, eyes, kidneys, and nerves.

If left uncontrolled diabetes can lead to other major complications such as:

To help prevent type II diabetes and its complications, people should: